Can A Dentist Tell If I Have Sleep Apnea?

Do I have Sleep Apnea?

You came in for your annual dental check-up, and the dentist makes a comment that it looks like you’ve been grinding your teeth. Followed by asking if you snore at night? Which instantly makes you wonder, “have you been talking to my spouse?” The dentist then goes on to tell you that those two things can actually be caused by sleep apnea.

Sleep apnea is a condition that can easily go undetected, but your mouth and teeth can tell a different story.

To find out more interesting information about sleep apnea, risk factors, and how sleep apnea can be treated by your local dentist Dr. Feng, continue reading to learn more.

How Do you Know If You Have Sleep Apnea?

Surprisingly, many people suffer from sleep apnea; men are affected more often than women. A few signs and symptoms of sleep apnea would include:
– Loud snoring
– Episodes where you stop breathing during sleep — which would be reported by another person
– Gasping for air while sleeping
– Waking up with a dry mouth
– Morning headaches
– Difficulty staying asleep (insomnia)
– Excessive daytime sleepiness (hypersomnia)
– Difficulty paying attention while awake
– Irritability
– Grinding (Bruxism) or Clenching of the teeth while sleeping

Dentists are often the first to diagnose a sleep disorder since the first sign of sleep apnea is oftentimes tooth grinding (also called bruxism). While sleeping, if you grind your teeth or tense your jaw muscles, it sends a message to your brain that you need to wake up to breathe.

Teeth grinding is one oral sign of sleep apnea. Other oral signs would include a tongue with scalloped edges, a small jaw, or redness in the throat (caused by snoring a lot, another symptom of sleep apnea).

While sleeping, the disorder can cause you to gasp for air, waking you up repeatedly, which diminishes your sleep quality and causes fatigue. Also, sleep apnea is linked to a higher risk of high blood pressure, heart disease, diabetes, and obesity.

Let’s take a look at these a little closer.
Obstructive Sleep Apnea
Obstructive sleep apnea happens when the muscles located in the back of your throat relax and cause the airway to narrow or close as you breathe, resulting in less air and lowering the blood’s oxygen level. The brain then senses your inability to breathe and briefly wakes you from sleep to reopen your airway. And this can be so brief that usually you don’t remember waking up. You may even snort, choke, or gasp. This pattern can repeat itself five-30 times or more each hour throughout the night and impairs your ability to reach a deep, restful phase of sleep. 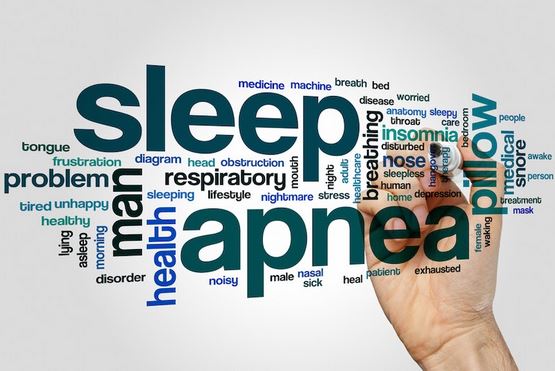 Sleep apnea can affect anyone, including children. But certain risk factors increase the probability of having sleep apnea.
Obstructive Sleep Apnea Risk Factors:
– Excess weight. Obesity dramatically increases the risk of having sleep apnea. The reason being- fat deposits around the upper airway can obstruct breathing.
– Neck circumference. People with thicker necks might have more narrow airways.
– A narrowed airway. You may have inherited a narrow throat. Tonsils or adenoids also can enlarge, which can block the airway, often seen in children.
– Being male. Men are two to three times more likely to have sleep apnea than women. However, women can increase their risk after menopause and if they’re overweight.
– Being older. Age can increase your risk for sleep apnea and has been seen to occur more often in older adults.
– Family history. Your sleep apnea may be hereditary or increase your risk if anyone else in the family has it.
– Use of alcohol, sedatives, or tranquilizers. These types of substances can relax the muscles in your throat, causing obstructive sleep apnea to worsen.
– Smoking. People who smoke are three times more likely to have obstructive sleep apnea than people who’ve never smoked before. This is caused by an increase in fluid retention and inflammation in the upper airway from smoking.
– Nasal congestion. Difficulty breathing through your nose — either from allergies or an anatomical problem — have a risk of developing obstructive sleep apnea.
– Medical conditions. High blood pressure, congestive heart failure, Parkinson’s disease, and type 2 diabetes are some medical conditions that may increase your chances of having obstructive sleep apnea. Hormonal disorders, polycystic ovary syndrome, chronic lung diseases such as asthma, and prior strokes also can increase your risk.

Can a Dentist Treat Sleep Apnea

Absolutely! Dentists are trained to look for oral abnormalities in the mouth and usually are the first to discover you could have a sleeping disorder. The next step, when Dr. Feng thinks someone has sleep apnea, she will often recommend a sleep study. (Although dentists have in-depth dental knowledge about symptoms and treatments, only a medical doctor can make an official sleep apnea diagnosis.) Once a definitive diagnosis is made and determined what type of sleep apnea you have, Dr Feng  can offer an oral appliance or NightLase® therapy to treat your mild to moderate sleep condition.

Dr. Feng offers patients two sleep apnea treatment options available at her Fairview, TX dental office.
Oral Sleep Apnea Appliance
Sleep apnea can be treated by an oral dental device that is worn while sleeping. The appliance is custom made to fit your teeth and positions the lower jaw forward while sleeping, which allows the tissues to relax at the back of your throat. Also, ensuring the base of your tongue doesn’t collapse and block your airway, giving you a safe and soundless sleep. Most patients prefer oral appliance therapy to treat their sleep apnea for comfort, convenience, and effectiveness.
NightLase® Therapy
Since Sloan Creek Dental is a state of the art laser-equipped office, Dr. Feng can also offer her patients laser therapy to treat sleep apnea. Dr. Feng uses Fotona’s NightLase® therapy- a non-invasive, patient-friendly laser treatment that increases your sleep quality. Doing NightLase® therapy will reduce the effects of sleep apnea and decrease the amount of snoring by using a gentle, laser-induced tightening treatment to contraction the collagen in the oral tissue. It’s a pleasant and easy way for you to regain a good night’s rest. NightLase® therapy consists of three separate treatment sessions over six weeks. The treatment’s final results have been shown to last up to a year, and the laser therapy can be repeated. Furthermore, the great thing about NightLase® is that it requires no device to be worn during sleep and involves no chemical treatment.

Are you ready to treat Your Sleep Apnea Disorder?

If you think you have sleep apnea or want to talk about treatment options for your mild to moderate sleep apnea, Dr. Feng is here to help! Sleep apnea is a pretty serious medical condition that should not go untreated. Be sure to mention at your next dental appointment or medical visit if you’re showing any signs of a sleep disorder.

Dr. Feng would be happy to evaluate your symptoms, direct you in what your next steps should be, and go over treatment options that are offered at (insert dental office name, anchor to the homepage) for sleep apnea.

Feel free to schedule an appointment today at our Fairview dental office to get started creating a bright and healthy smile!